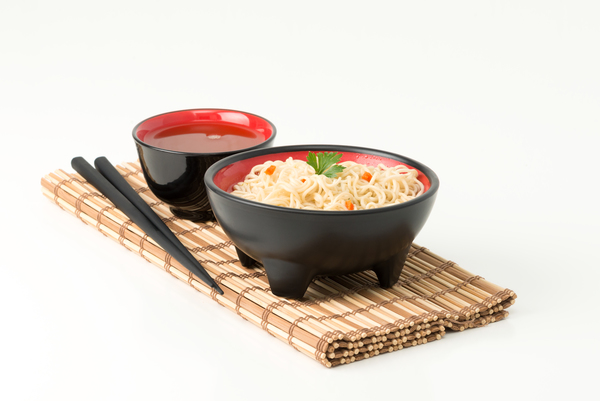 Nutritious, tasty, and extremely economical, Ramen noodles have managed to become the crowd favorite, and rightfully so!

Originating back in China, it traveled across the world and is now one of the most popular dishes.

The huge surge in popularity of ramen noodles led to the establishment of an increased number of ramen-specialized restaurants.

Not just in China and Japan, but they are consumed widely in all the countries. Some people even eat them daily as a whole meal.

This article aims to objectively find out whether this dish should form a part of your diet.

What are Ramen Noodles made of?

Wheat flour, salt, water, and kanusi, a type of alkaline water, make up the basic ingredients for ramen noodles.

The alkaline water consists of sodium carbonate, potassium carbonate as well as a little bit of phosphoric acid.

These ingredients are thoroughly mixed together to produce a smooth dough which is then shaped and cut.

After cutting, the dough is steamed to dry it out and deep-fried briefly for further dehydration.

These dried units are then packaged in small portions along with a packet of seasoning and sold in various convenience and department stores.

To understand this fully, you first need to be familiar with the preparatory process of ramen noodles.

As they are already fried once before packaging, they only need to be boiled for no more than 5 minutes before eating.

The seasoning packet is also mixed in the noodles during this stage. If the noodles still feel bland, you can also add spices of your choice.

Ramen noodles are most commonly served with a boiled or fried egg and some kind of meat such as chicken or pork.

These extra add-ons help make up for the low nutritional value of the noodles themselves.

Instant ramen noodles are very high in sodium, with one package containing up to 1760 milligrams of sodium.

The WHO has set the daily intake of sodium to no more than 2 grams, and ramen noodles account for 88% of it.

Moreover, instant ramen noodles also contain ingredients such as flavor enhancers and preservatives that are harmful to your health.

One serving of ramen noodles has been found to contain less amount of calories as compared to other foods like pasta.

However, these noodles are also low in proteins, fibers, and other macronutrients such as Vitamin A, vitamin C, calcium, and magnesium.

They also contain fewer amounts of antioxidants and phytochemicals that are known to have a positive impact on your health.

Do Ramen Noodles make you fat?

Although ramen noodles are not exactly what you would call healthy, they have fewer chances of increasing your pounds if consumed appropriately.

One packet of ramen noodles contains two servings, which totals up to 350 calories, along with low protein and fibers.

This is not so bad if consumed once in a while but extremely dangerous if ingested daily.

Not only will it make you gain weight, but it also has adverse effects on your health.

These instant ramen noodles are also immensely difficult to break down and digest. They spend long hours in your stomach before finally being digested.

One study shows that it usually takes up to 32 hours for instant noodles to be digested, while typical noodles only take 1-2 hours.

This leads to digestive difficulties such as constipation, bloating, and indigestion, among other symptoms.

They also increase your water retention, which is not a good thing if you are trying to lose weight.

What other effects do Ramen Noodles have?

TBHQ is an important ingredient in processed foods and is also present in ramen noodles.

Though it is not hazardous if consumed in small amounts, chronic exposure to TBHQ can lead to severe issues.

It may increase the risk of lymphoma and cause liver enlargement and vision disturbances.

Most brands of ramen noodles also contain MSG, Monosodium Glutamate, which is another controversial ingredient.

High consumption of MSG has been linked with headaches, nausea, high blood pressure, weakness, muscle tightness, and flushing of the skin.

This may lead to an increase in the risk of stomach cancer, heart disease, and stroke.

It is also very dangerous for salt-sensitive people.

Moreover, women who eat ramen noodles twice a week or more are at a higher risk of metabolic syndrome than those who eat less.

So are Ramen Noodles bad for you?

Eating ramen noodles in a moderate amount won’t affect your health, but as soon as you cross that line, it becomes dangerous.

Regular consumption of ramen noodles has been proven to result in adverse health effects and leads to overall poor diet quality.

It is simply not worth it to sacrifice your health for something that does not even completely satisfy your hunger.

A good alternative would be to use fresh, preferably homemade, noodles in your ramen dish.

They can be digested a lot faster and do not contain any added preservatives.

If you can’t give up on instant ramen noodles, then try to look for other brands that offer healthier alternatives.

Unlike the unhealthy version, these noodles are not dried using the deep-fried technology but instead blow-dried at high temperatures.

This helps retain some of the nutrients that are otherwise lost and also keeps the calories in check.

You can also add vegetables and meat to your bowl of ramen, which covers up the nutritional deficit in ramen noodles and makes it a full, nutritious meal.

There is no doubt that ramen is a go-to dish for anyone who is racing against the time or on a budget.

But if you prioritize your health over anything else, then make sure to be wise in the choices that you make.